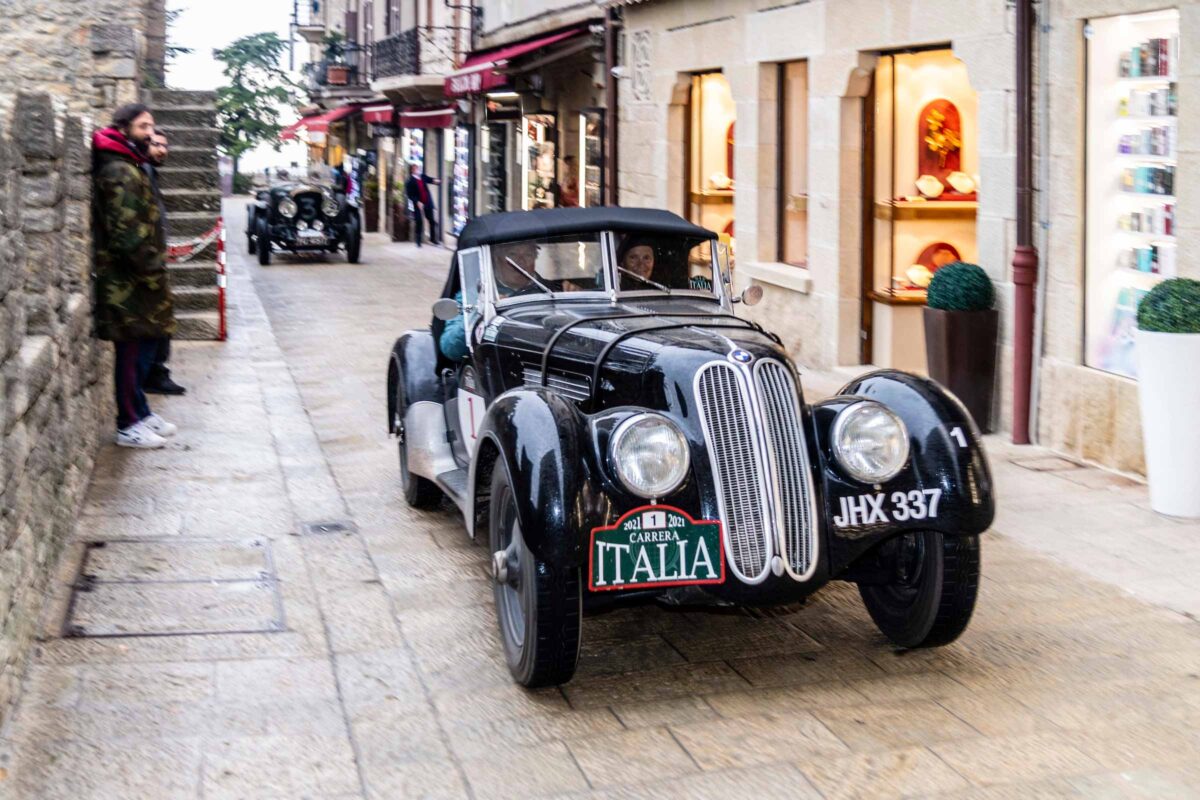 Reigniting passions for international driving adventures, Rally the Globe has rekindled spirits and refuelled rivalries with the incredible Carrera Italia.

Set on some of Europe’s finest roads, the memorable ten day escapade was the not-for-profit club’s first foreign foray since the curtain came down on the pre-pandemic Southern Cross Safari set in East Africa in early 2020.

And, as the prizes were awarded to the winners by rally legend and newly appointed Club President Ari Vatanen, the meticulous efforts of the Rally the Globe team to mastermind such a swift return to overseas action were hailed by all as another massive – and very welcome – success.

The task of planning such a spectacular route with travel restrictions constantly changing was never less than challenging and the ingenious planners had to overcome many logistical difficulties – not least informing no fewer than 574 public institutions about the event and the booking of suitably stunning hotels under the shadow of Covid.

Their painstaking labours, though, were rewarded with a superb entry of 38 pre-1977 vintage and classic cars lined up for the start; these ranged from pre-War Bentleys and Frazer Nashes to more modern Jaguars, Mustangs, Porsches and Volvos. Moreover, emphasising Rally the Globe’s global appeal, competing crews came from Germany, France, the Netherlands, Belgium, Switzerland, Poland, Liechtenstein, Ireland, the Czech Republic and the United States as well as the UK.

Inspired by Italian rally history, Carrera Italia started and finished in sun-drenched Sanremo on the Italian Riviera – home to the country’s round of the World Rally Championship for many years – and ran to Rally the Globe’s much-loved ‘Carrera’ format. These deluxe events feature great asphalt roads and fine hotels with competitive Regularity Sections and Speed Tests mostly set on permanent race circuits.

The first few days saw the excited participants journey via the Ligurian Alps, Italian Lakes and Barolo vineyards to the resplendent resort town of Cortina d’Ampezzo set in the Dolomites (where they encountered unseasonal snow), home of the Winter Olympics in 1956 and co-host again in 2026.

Two nights in the 5-star Hotel Cristallo then provided the perfect springboard for two more days of superb motoring on the stunning mountain roads surrounding Cortina.

The return journey to Sanremo was equally remarkable. Leaving the hills, competitors travelled via the Adriatic coast to San Marino – the world’s oldest republic where an exclusive drive through the magical old town had been organised – and then through the Chianti vineyards of Tuscany before a final overnight stop back on the Mediterranean coast.

Adding further spice, each day’s itinerary included a number of challenging Regularities to test both driving and navigational skills as well as exhilarating Tests at venues such as the Circuito Tazio Nuvolari, Autodromo di Modena and Pirelli’s secret state-of-the-art tyre testing track at Vizzola.

When all the score cards had been totted up, the prizes were presented to the winners by Vatanen, the renowned ‘Flying Finn’.

“Mike’s driving has been excellent, very good around the tests – particularly in the wet – and we wouldn’t have won without him acing those sections,” revealed a delighted Lorna. “As for the Regularities, there were some fun ones to deal with such as the one [Foza from Valstagna] with 21 hairpins!”

The Spirit of the Rally prize was awarded to Federica Mascetti and Enrico Paggi for their unfailing good humour, helpfulness and fun throughout. And for bringing not one but two beautiful cars to the event having swapped their stricken Alfa Romeo for a more dependable 1967 Mercedes 190 SL after the first couple of days!

The Against All Odds trophy was presented to Ean and Alison Lewin for their efforts in not only keeping their 1973 Ford Escort Mexico on the road despite multiple mechanical issues, but also securing a top ten overall finish.

“Motor cars have given so much to the modern world and using them like this is a fitting way to honour their massive contribution,” declared the ever-enthusiastic and cordial Vatanen who was quick to join in the celebrated Rally the Globe camaraderie.

“To have Ari with us was a just incredible finish to an incredible event,” concluded Fred Gallagher, Rally the Globe’s illustrious Rally Director and one of Vatanen’s co-drivers back in the day.

“I must congratulate the entire Rally the Globe team for delivering such a fantastic adventure in what are still difficult times. The route was just unbelievable and, once again, to be experiencing the wonderful spirit of friendly competition was the perfect reward for all the hard work everyone has put in to reviving such epic events for all to enjoy.”

Rally the Globe returns to Cortina next autumn for the Vintage Dolomites, a shorter but no less spectacular six-day event reserved exclusively for pre-war cars. In the meantime, the club is gearing up for next spring’s Generations Rally set in the English Lake District plus the following Carrera España at the end of April.  Three weeks of June are reserved for an Eastern European adventure with the more intrepid Ypres to Istanbul Challenge.

FROM THE SHORES OF THE MED TO THE ATLANTIC COAST
CLOVERLEAFS SERIES SHORTLISTED FOR HISTORIC MOTORSPORTS AWARD
© 2020 - All rights reserved Rally the Globe Limited - Company no. 11592553 | CRAFTED BY MOJO
error: Content is protected !!