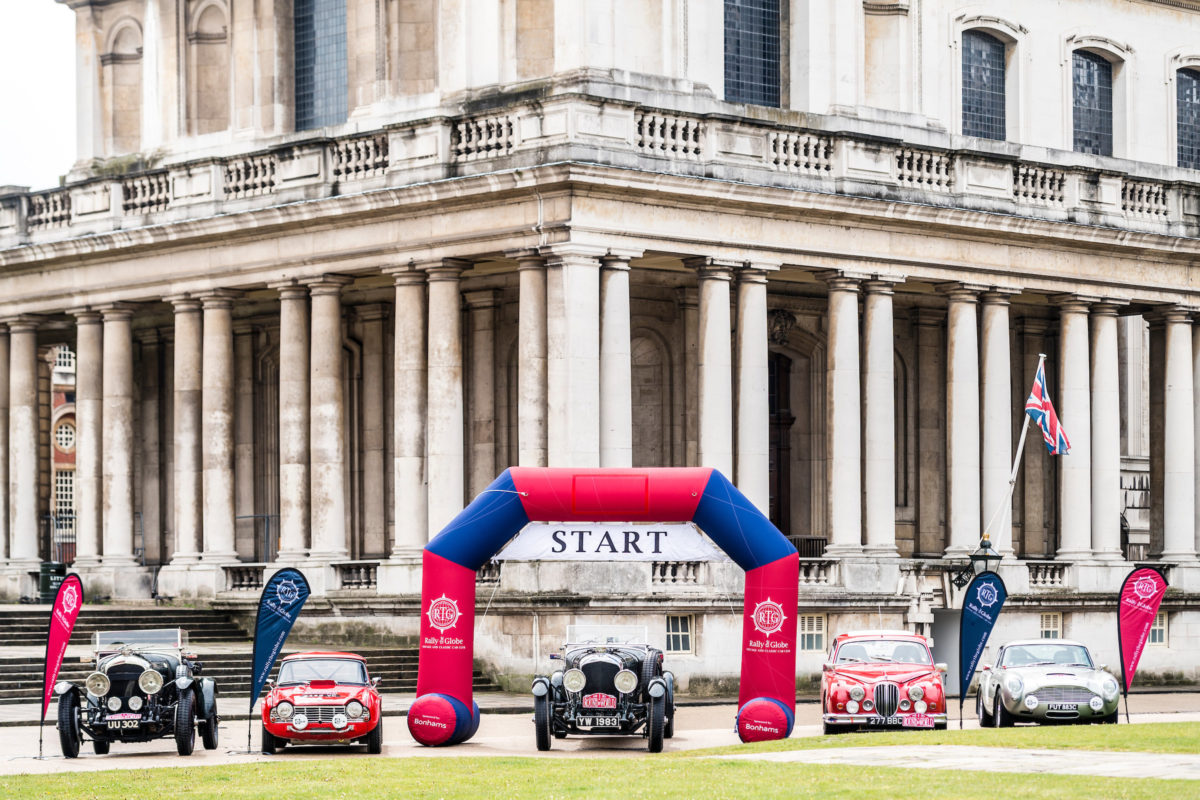 Rally the Globe is delighted to announce its seminal ‘Round the World’ driving adventure – the greatest-ever circumnavigation of the planet Earth on four wheels.

Set for 2020-2021, this will be the first such driving odyssey for a generation and, totalling around 22,000 miles (35,000 kilometres), it will be the longest, most challenging and, ultimately, the most rewarding yet staged, eclipsing the distance of the previous event run in 2000 to mark the millennium.

Fittingly, Round the World was launched last evening (Wednesday) at Lowther Lodge in Kensington, London home of the Royal Geographical Society, an organisation closely associated to so many of the great global explorers including Livingstone, Stanley, Scott, Shackleton, Hunt and Hillary (photos above world map below).

Taking a leaf from the fictitious Phileas Fogg in the famous Jules Verne novel, the full circuit of the globe will take a total of exactly 80 days and will start and finish in London. Not just London, though, but the stunning Old Royal Naval College in Greenwich (photos above and below world map below) right next to the Royal Observatory and the Prime Meridian Line (Longitude Zero).

Adding to the spectacle, entries are restricted to vintage, post-historic and classic cars built before 1976 and open to crews of all abilities and experience.

Such is the incredible scale of the journey that Round the World is divided into three individual legs: the first from London to Casablanca in Morocco (23 May to 9 June 2020); the second from Boston, Massachusetts to Vancouver, Canada  (19 September to 10 October 2020) and finally the third from Vladivostok in Russia back to London (8 May to 19 June 2021).

In total, plucky participants will face more than 100 competitive speed and navigation tests along the epic route and the hard-earned victors will be crowned as ‘Rally the Globe Round the World’ champions back in Greenwich after 80 days of unforgettable adventure through some of the most spectacular spots on Earth including the Sahara Desert, Rocky Mountains and virtually unexplored gravel routes through Siberia.

Crews are allowed to enter individual legs but, with limited places available, priority will be given to those rallying the world. The more intrepid, bold enough to enter cars from the pre-1946 era, may also be given preferential treatment to ensure the field features a full spectrum of motoring history.

“It must be every motoring enthusiast’s dream to drive right around the world and, for many, this is an incredible once-in-a-lifetime opportunity to fulfil that wonderful ambition,” enthused Rally the Globe Chairman, Graham Goodwin who, as a Bentley owner, is a regular competitor in many of the less ambitious events. “Cars, competition and camaraderie all on the greatest possible scale – my name is going to be one of the first on the list!”

The marathon intercontinental itinerary – including hand-picked hotels, magical starlight camps, rarely used mountain and desert roads plus numerous competitive tests at worldwide venues ranging from famous Grand Prix circuits to privately-owned gravel roads – has been masterminded by Fred Gallagher and John Spiller (photo right of third row below) both of whom were at the launch in London together with key members of the Rally the Globe club, a number of keen entrants and invited media.

Gallagher’s track record is second to none. He has competed at the very top level winning numerous World Championship rallies when co-driving with sporting legends such as Juha Kankkunen, Ari Vatanen and Björn Waldegård – and subsequently working as Clerk of the Course on many World Rally Championship rallies and classic enduros.

“It’s one of those projects for which the planning has been almost as challenging and rewarding as the participating,” remarked Gallagher. “We have had teams all over the globe liaising with regional authorities, local experts and assisting car clubs to create what we are convinced will be the greatest adventure on four wheels ever staged.

“We have purposefully followed the sun travelling west so the three legs are of escalating length and challenge. It will be a lifetime achievement for all those who complete the remarkable journey and the eventual winners will have every reason to celebrate their unique success.”

AROUND THE WORLD: PART ONE

The incredible Around the World odyssey sets out from Greenwich shortly after dawn early on a Sunday morning. After taking in the renowned landmarks of London, participants will be quickly into tests to establish a classification before arriving in Portsmouth for a ferry crossing to Bilbao in northern Spain. Three challenging days on the Iberian peninsula follow commencing on the gravel tracks north of Valladolid and then through the Sierra de Toledo. Next is a short ferry trip to Tangier en route to Fes and a desert camp at Erg Chebbi in the Sahara. From Ouarzazate next it is over the Tizi n’Tichka pass in the High Atlas and onto Marrakech. For the final three days the route ventures to the Atlantic coast with overnight halts in Agadir, Essaouira and, finally, Casablanca. And to think the adventure has only just begun!

AROUND THE WORLD: PART TWO


Boston, US to Vancouver, Canada

The race to be crowned Rally the Globe Round the World champion is rejoined in Boston in the fall with an unforgettable three-week traverse of North America culminating in Vancouver. And, with an abundance of speedways, raceways and circuits en route, the competition will step up a further gear. Visits to Watkins Glen and Indianapolis are interspersed with tracks through the Susquehannock State Forest, home to a major US Pro-Rally. A long-loop through the Badlands National Park is followed by Mount Rushmore, gravel sections in the Big Horn Mountains and into the Yellowstone and Grand Teton National Parks before a well-earned sojourn in Jackson Hole. With energy banks refreshed the deserted gravel roads of Idaho and Montana are next before the route heads into Canada and Banff, Jasper and Whistler resorts in the spectacular, autumnal snow-capped Rocky Mountains.

AROUND THE WORLD: PART THREE

Testing crews to their very limits, the final of the three legs adds up to more than half of the entire event as teams traverse Asia and Europe before the intrepid arrive back at the Prime Meridian Line in Greenwich, London. Competitors will face frequent gravel tests and roads well off-the-beaten track on new routes in Russia and Kazakhstan that have never been rallied before including those along the shore of Lake Baikal in Siberia, the oldest and deepest lake on the Earth. It is then onto the Silk Route ever-eastwards before the route heads north across the Central Steppe of Russia. After a series of further tests in Belarus, it is onto the Cold War airfields of Poland and a stunning street stage in the city of Szczecin. A visit to the Zandvoort GP circuit in the Dutch dunes concludes the competition in continental Europe with the survivors then crossing the North Sea from the Hook of Holland to Harwich. A couple of strategically final placed passage controls will keep navigators on their toes right up to the finishing line back in London.