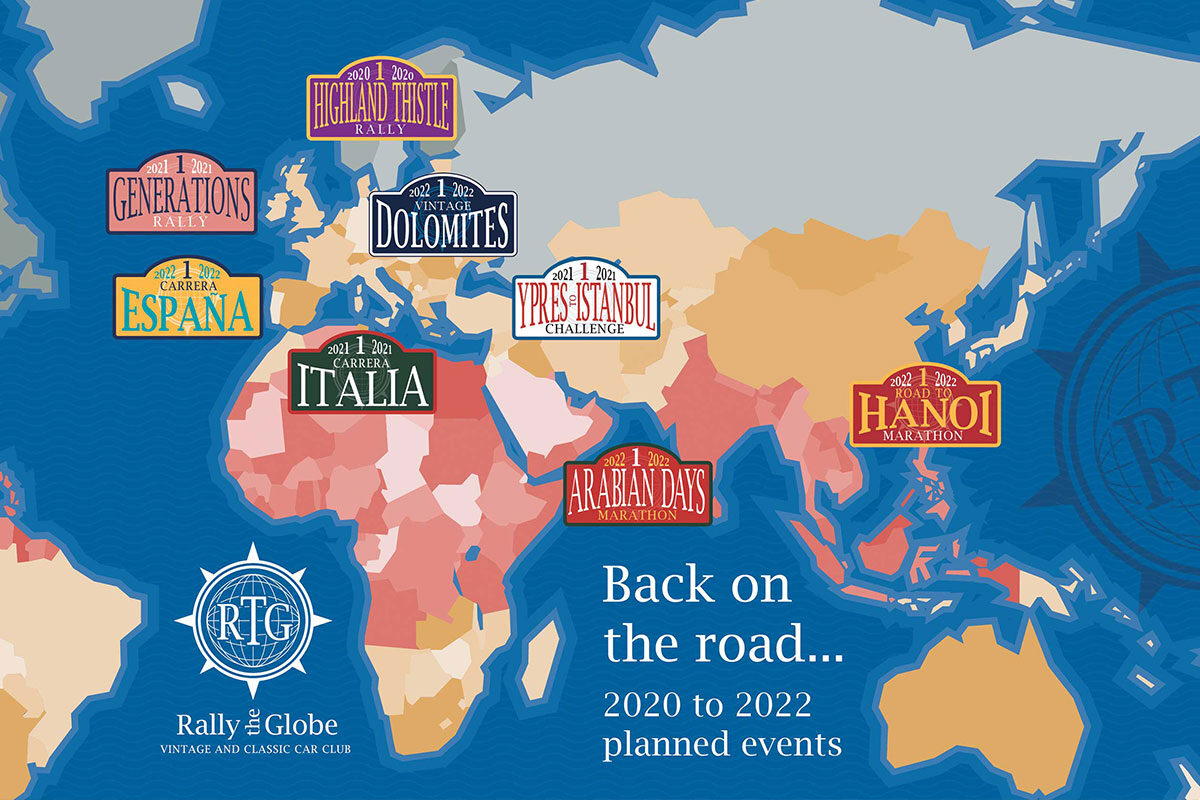 Here at Rally the Globe we have announced an innovative and exciting new calendar of future events for happier times once the current COVID-19 crisis has passed.

With novel coronavirus causing widespread worldwide lock-downs and major travel restrictions, many of the club’s forthcoming events – including the eagerly-anticipated Round the World circumnavigation – have had to be cancelled.

In their place a revised programme of driving adventures has been initiated for those vintage and classic car enthusiasts seeking post-pandemic competition and camaraderie.

Anticipating the likelihood of international travel regulations being gradually relaxed and participant confidence being restored in the coming months, the amended calendar commences this autumn with the first of two events set entirely in the UK. These are then followed in 2021 by more adventurous voyages into mainland Europe before the return of even more epic international motoring experiences in 2022 and beyond.

“Clearly there are still lots of uncertainties ahead but we wanted to provide our supporters with some light at the end of the tunnel – hence this new line-up of appealing and accessible driving escapades for which entrants can start planning right now,”

“The prospect of getting back into such wonderful events will certainly help to lift spirits.”

First up on the revised schedule – government advice permitting – is this autumn’s spectacular Highland Thistle Rally (4-9 October). Starting and finishing at a luxurious five-star hotel in St Andrews, the legendary birthplace of golf on the Scottish east coast, the five-day route is open to all pre-1977 models and will take participants west to the wonders of Skye and then north to the magical mountains and stunning roads beyond Inverness.

Though clearly aimed at attracting entries from within the UK, Rally the Globe is also hoping that its regular competitors from northern Europe will take advantage of the convenient Amsterdam to Newcastle ferry route to renew rivalries and friendships in Scotland.

“We are very much hoping the Highland Thistle will be a big celebration of our freedom but clearly it is entirely dependent on what the Scottish government allows at the time – that’s why we are offering entrants the security of a full refund should such gatherings not be permitted come the autumn,” confirmed Graham Goodwin, Rally the Globe’s Chairman.

“While it’s obviously disappointing to have cancelled great events such as the Round the World, on the positive side we have comprehensive insurance in place and thus the club is in a secure situation to start planning for the future. As a club made up largely of participants, we have taken a pragmatic approach to our revised calendar and focused on events we believe our members will feel both safe and excited to enter post coronavirus.”

The appropriately titled event is open to family driver/navigator crews comprised of different generations, whether fathers and daughters, aunts and nephews or even grandparents and grandchildren. The novel format has been introduced specifically to inspire those of a younger age to experience the competitive pleasure and convivial ambiance of the endurance rally fraternity and, encouraging maximum participation, entries are open to cars built before the end of 1985.

The cleverly conceived three-day weekend configuration has been created to minimise time spent away from school, college or office. Following pre-start scrutineering on Friday, that afternoon’s schedule will feature some simple navigation tests to whet appetites for some slightly more challenging escapades on Saturday and Sunday morning.

Starting in Belgium and concluding in the historic gateway to Asia, the former will include plenty of challenging European gravel and asphalt roads through countries such as Germany, Austria, Czech Republic, Hungary, Romania, and Bulgaria.

The latter will run to a similar style to Rally the Globe’s super-successful Carrera Iberia with top class hotels and an all-asphalt itinerary including visits to several notable race circuits.

Based in Sanremo on the Italian Riviera, the alluring Carrera Italia will journey through Como and the opulence of the Italian Lakes, Cortina and the delights of the Dolomites plus Verona and the marvels of Tuscany.

Then 2022 sees the return of Rally the Globe’s truly global events. The year starts in February with the epic Road to Hanoi Marathon with a never-experienced-before driving route through the extraordinary topography and cultures of Myanmar, Thailand, Laos and Vietnam in southeast Asia.

The action then returns to Europe for the Carrera España and the Vintage Dolomites – reserved for pre-1946 Cars – before switching to the Arabian Peninsula for another marathon-style rally through the extravagances of the UAE and Oman. Plans for an amazing three-part Pan-American marathon running from Alaska to Cape Horn are now being considered for 2023/24.

“We’ve tried to be as realistic with our future event programme as it’s possible to be in the current uncertainties,” disclosed Gallagher. “Hence our start in Scotland and England before venturing further into Europe and, in 2022, going worldwide once again. Rally the Globe has already earned itself an enviable reputation for the delivery of incredible international driving experiences and we will return with some equally fabulous events once the current travel restrictions are lifted.”

LIGHT AT THE END OF THE TUNNEL
NEW APPOINTMENT STRENGTHENS CORE RALLY THE GLOBE TEAM
© 2020 - All rights reserved Rally the Globe Limited - Company no. 11592553 | CRAFTED BY MOJO
error: Content is protected !!